My entire year has been a series of milestones to changing my life and the start of this month I hit another one.  When I first separated from the X, I tried to stay focused on some of the positive things.  I do this with most things actually, as a way to keep going through my chaotic life.  The silver lining from the beginning for me was that I would get to call a place my own.  I could decorate it the way I wanted.  I wouldn’t have to ask anyone what they thought, or decide against something because “he would hate that”.  It was all mine, and I could make all the decisions.  I wanted it to be as girly as possible and as cozy and comfortable as I have always wanted my place to be, but never really got there.

I finally got the chance to do that.  My two girls and I were staying with my parents after I sold the house I had with the X.  I stayed for about 5 months trying to decide what I wanted to do, where I wanted to go.  I was happy for the time I was there because my girls got to have some quality time with their grandfather.  My mother was a big help with the children even though she was dealing with her own chaotic life this year.  We were able to be a support for each other.  I would listen to her vent about my dad’s latest doctor appointment and the troubles she has with her mother who is suffering with dimentia and is nearing the end of her life as well.  It has been one hell of a year for our family and having her as a sound board and vice versa has been extremely helpful.  But the girls and I needed a change for the better.  We needed our own space, our own routine, and I needed that next milestone that I had been waiting for since I first realized I would have to face being alone.

Now I have talked about this before.  The fear of loneliness and handling everything on my own was very real.  And here I was creating an even lonelier atmosphere around me.  But for the sake of kids and the need to really move forward with my life I made the plunge.  It wasn’t more than a week before I really felt the effects of being single.

The first few days were great.  I hired movers, because never again will I try to do that without movers.  I am lucky to have such awesome friends who came to help me unpack, build furniture, and hang pictures.  I never had so much help moving.  In the past I would refuse help from friends because I had a husband to do the moving with…..and then would find myself doing everything on my own, or wasting so much time fighting about what goes on the wall, what needs to be done first, and what game is on TV that will halt all productivity.  This was already the most relaxed, productive and peaceful moving experience that I had ever had.  That is, until the bunk beds came.

When I first rented the apartment I made the mistake of thinking two twin beds would fit in the second bedroom side by side along with the other furniture and massive mounds of toys that my girls have collected.  I was so excited and went and bought everything brand new.  New frames, mattresses, bedding, everything.  I was so wrong.  There was no room to play, no room to open dresser drawers.  I had overestimated the size of the room and quickly found a solution for bunk beds.  It took a week for them to arrive so the girls had to sleep on their mattresses on the floor for a few days, but we made it work.

When the boxes came, they were so heavy I couldn’t lift them.  I had them delivered to my parents’ house so I wouldn’t need to worry about missing the delivery so I first had to somehow get them in my car.  It was quite an image as I went over there in boots with heals, thinking I am just going to stop on my way home and grab this bed really quick.  I shuffled these two very large, very heavy boxes into my trunk by some miracle in the dark.  I drove to my apartment building and geared up to make the same unbearable trip with the large boxes into my apartment, on the second floor, no elevator.  I luckily ran into a very nice neighbor who noticed the struggle and helped me slide the larger box up the stairs and over to my door.  What a wonderful human being.  I managed to shuffle the second box into the apartment and felt I could collapse right there.  I was exhausted and it was 8 PM and now I had to actually build the thing.

I made some coffee and got to work.  The girls would be home from their dad’s house the next day so it was now or never.  This wasn’t my first time building furniture so it was smooth sailing at first.  The combination of exhaustion and watching old movies as I was building led me to building the second bed completely wrong.  At this point it was midnight and I was in tears.  I knew this moment would come at some point in the process.  I was taking on this intimidating project and I didn’t have someone there to yell to when I was pissed off and shouting profanities.  I forced myself to get a grip, take the bed apart, and start again.  Then came the hard part.  I had to lift the second bed frame and place it on top of the first.  By myself.  I had all sorts of images of myself getting pinned between the two and being left for dead.  No one would find me for days.  Then I thought, this is why people stay married…right here.  So you have someone to help you build the damn bunk beds!

I gave myself a quick slap in the face and went for it.

It took some time and trial and error, but I did it.  No injuries, minimal crying, and I only slammed on my finger once.  It was built, it was done, and I did it all on my own.  I birthed and nursed two babies, and yet this felt like my biggest accomplishment.  It made me realize that I can do this.  I can live by myself.  I can do things on my own.  I can complete this next milestone like a champ!  I don’t need to be afraid of what “alone” feels like.  It can be rewarding and it made me realize, I GOT THIS! 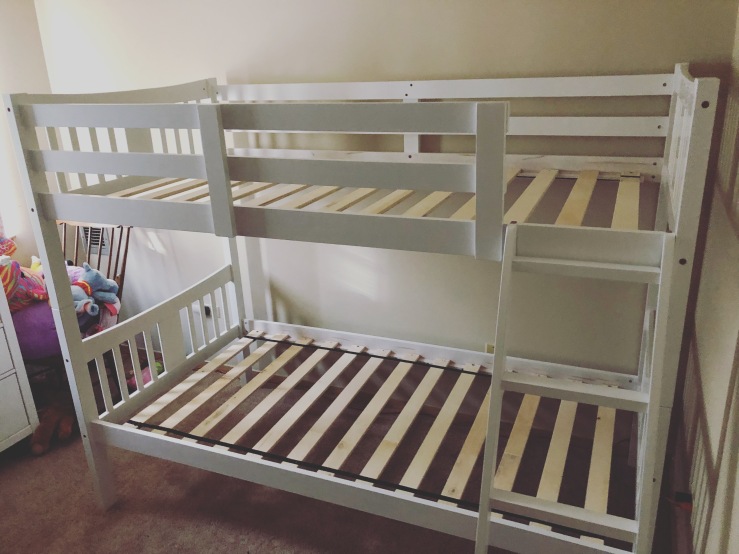 View all posts by Lizzy

1 thought on “A new milestone”

This site uses Akismet to reduce spam. Learn how your comment data is processed.